close
Skip to content
menu
close
Where does the Ekofisk name come from?Landing options
person by the Norwegian Petroleum Museum
Phillips announced on 2 June 1970 that a giant oil discovery had been made on the Norwegian continental shelf - an elephant!

On the basis of the third appraisal well, Britain’s Core Laboratories had concluded that Ekofisk contained 4 200-6 900 billion barrels of oil.

Of this, 15-22 per cent was considered to be commercially recoverable, with a daily oil production from each well of 8 000-10 000 barrels.

In addition, the Phillips group participated in the Amoco/Noco group’s first wildcat on a structure which lay on the boundary between blocks 2/5 and 2/4 and had been dubbed Tor. Discoveries were eventually made in all these blocks. 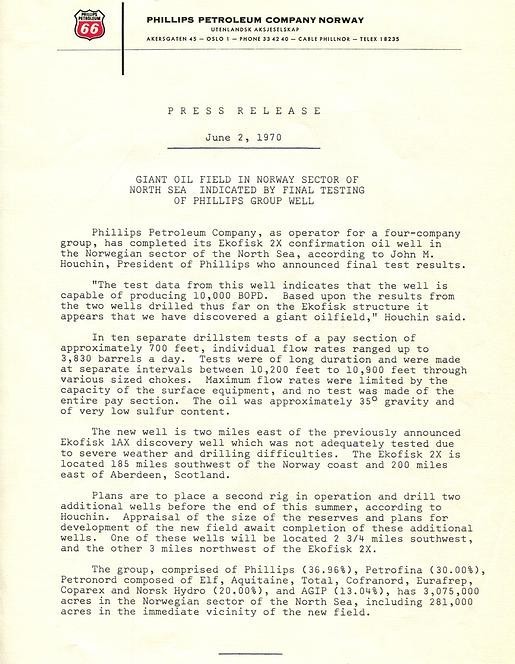 History
Survived the Alexander L. Kielland disaster
My name is Tony Sylvester. One of the platforms that I was working on was in the Ekofisks, it was the Alfa 2/4 F and I worked for a company at the time that was doing 3 platforms, We’d installed them and hooking up all the pipe work and stuff like that. On that job I was a general foreman and looking after all the trades, installing pipe work, steel work and stuff like that. We’d had an accommodation semi-submersible which was alongside one of the platforms; we was shuttling every day to that platform because there was no accommodation on the platforms we worked at. And that platform was called the Alexander Kielland.
History
The rescue from the fire on Ekofisk 2/4 A
Dave Taylor from Hull in England was a Crane Operator on Ekofisk Alpha 2/4 A when the fire occurred on the platform November 1st, 1975. He was 27 years at that time. Here is his story from the tragic accident when three men died:
© Norsk Oljemuseum
close Close